The history of Quakers in Southport stretches as far back as the 16th century and the origins of the movement itself. In 1652, George Fox, the founder of the Religious Society of Friends (the formal name for Quakers), famously had a vision at the top of prominent Lancashire landmark Pendle Hill. While he soon moved on to continue his travels, his influence remained (at one point 10% of the Lancashire population identified as Quakers), and early Friends settled in North Meols.

Due to disputes with existing authorities (religious and otherwise), the 1600s were a tumultuous time for Quakers. They refused to be buried in Church of England graveyards, and therefore had to buy pieces of land for their burials. Notable is the burial ground in Bickerstaffe (home to one of the earliest formal Quaker Meetings), where over two-hundred Friends were interred from 1665-1813. For a complete history of the Bickerstaffe Quakers, please see Mary Bonsall’s thorough monograph.

As Southport developed as a town in the late 1700s, the descendants of those early North Meols Quakers along with newer followers were amongst the numbers drawn to its opportunities. They originally held Meetings in their homes. This settlement was not without incident; there were initial clashes with the Anglican Clergy about payment of church tithes, which the North Meols Quakers had managed to avoid by living on the fringes of the manor.

In 1826, a small Meeting House was built opposite St. George’s Church on Lord Street. Meetings were held at 10:30am and 6pm every Sunday. Southport was still a rather sandy and barren resort, but attendance continued to climb. Hardshaw West (the collective body of Meetings in the Northwest) acknowledged the local society as a ‘settled Meeting’ in July 1832. 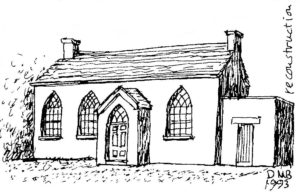 A reconstructed image of Southport’s first Meeting House in 1826

A young Quaker diarist named Mary Benson visited in 1845, and found Southport Meeting to be “a quiet little place”. She was less keen on the weather and the town itself, which was described as mostly consisting of “stiff and stuccoed/prim and starch suburban villas”, and “singularly barren of anything of interest”. Although its coastal sands were “very beautiful and as smooth as the top of a table.”

In April 1865, with the blossoming spectacle of Lord Street attracting greater and greater numbers, a travelling Quaker named Isaac Hadwin built a larger Meeting House (with a caretaker’s cottage attached) on the corner of Princes Street and Portland Street. Substantial financial support was provided by a Liverpool cotton merchant.

The Portland Street building had a long and significant life as a pillar of the local community – during the Liverpool bombing in WWII it was divided into cubicles and used as a short-stay home (see also: the history of Liverpool Quakers). By 1954 however attendance had fallen again, and in December of that year the Meeting House was sold to the Jewish community to become the Jewish Reformed Synagogue. The building’s long and varied history continues: today it is the Portland Hall Spa, which attracts clients (some famous) from far and wide. 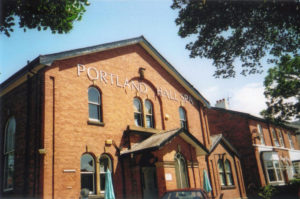 Two souvenirs of its Quaker past live on in the current Meeting House: an antique clock and a glass notice board.

Following the sale, Southport’s Quakers withdrew to rented accommodation in Weld Road, near Birkdale station. Unfortunately the regular ringing of the level crossing bells proved to be unconducive to silent worship! However, the Society of Friends were very active in the community, and remained influential enough to open the present Meeting House on Court Road (at the time named Lawton Street) in 1960. 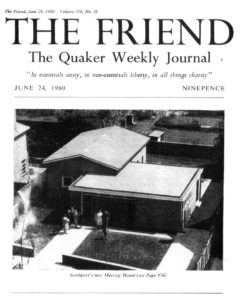 Southport’s new Meeting House, featured in a 1960 edition of The Friend Magazine

Southport Meeting House still hosts weekly Meetings for Worship, and retains its strong ties to the local community. The building is also utilised by a diverse array of other organisations – please see Other Groups and Classes.

We hope you’ll join us and help to build on Quaker history as we move ahead into the next century!